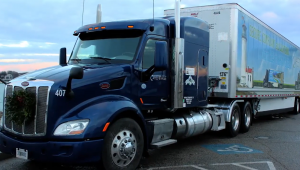 A Heritage Environmental Services truck ready to haul wreaths across the United States.

Wreaths Across America began in 1992 with a mission: To remember veterans, honor those who serve and teach future generations the value of freedom. In 2016, Heritage Transport sent two trucks to Abraham Lincoln National Cemetery in Joliet, Illinois, a meaningful site for members of the Heritage family whose loved ones are buried there.

“Most everyone has a veteran in their life, and this is our way of saying thank you for the freedom that we have today,” said Teresa Wade, Asset Management Coordinator at Heritage Environmental Services. “It touches my heart because my husband is retired military, so this is a big part of my life.” Wade comes from a family of servicepeople, including her father, nephews and twin brother. The Heritage Group is proudly home to hundreds of veterans, including Fred Fehsenfeld, Sr., former CEO and the second in The Heritage Group’s four generations of family leadership.

“The motto of Wreaths across America is to remember, honor and teach. We’re remembering the soldiers and honoring them, and teaching our children the importance of our freedom.” – Teresa Wade, Asset Management Coordinator at HES 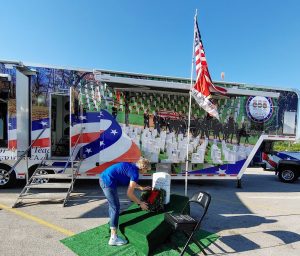 Teresa Wade demonstrates placing a wreath at a Wreaths across America educational event.

Although the initiative is nation-wide, Heritage’s involvement hits close to home. Each year, more employees get involved, not only by donating to purchase wreaths but by volunteering to lay them in their local cemeteries. This year, seven HES locations will be laying wreaths, including those near Toledo Memorial Park Cemetery and Mausoleum in Ohio and National Cemetery of the Alleghenies in western Pennsylvania, where active Heritage managers were called to serve overseas. Employees from all over the company’s 26 locations have donated, and Indianapolis locations have hosted various fundraising events throughout the years. “This is our goal: to one day have donated as many wreaths as we transport,” said Joanne Jones, HES’s Sustainability Leader.

The drive itself, spanning from Columbia Falls, Maine, to one of 2,500 national cemeteries, is an honor shared by nine Heritage drivers so far. “It’s a privilege for the drives to haul the loads. You have a lot of drivers that request it,” said Jones.

“We let our veterans volunteer first, and then we have a lot of drivers that aren’t veterans, but their family members are. They want to do their part—they’re really big supporters. So they also had the opportunity to go,” added Wade.

“We like to honor our veterans, and include them, and show them that we care.” – Joanne Jones, Sustainability Director at HES 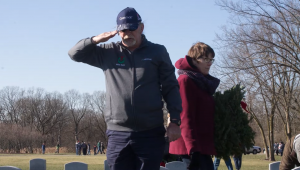 National Wreaths Across America Day—a Saturday in December when tens of thousands of volunteers lay wreaths in cemeteries across the nation—has become a Heritage family affair. This year, Jones, Wade and their families will be traveling to Arlington to volunteer, where they’ll join military parent and HES Senior Vice President Angie Martin and her husband.

“We all really care about this charity and so many people—everyone that donates, everyone that lays wreaths—has a story to tell about their family, and that’s why they continue to support it. That goes to the whole Heritage family culture that we have, and family values,” Jones said. “I’m just proud to belong to a company that is so supportive of this cause,” Wade added. “It just means so much to me.”

To donate to HES’s Wreaths Across America page by sponsoring a wreath, visit https://www.wreathsacrossamerica.org/social/IN0127-HeritageEnvironmentalServices?Sid=166306|14720|0|1.

To read about two of The Heritage Group’s veterans, visit https://thgrp.com/a-reunion-to-remember/.

On November 11 and every day, we want to thank our more than hundreds of veterans in the Heritage family for your service. To celebrate Veterans Day, enjoy this story of two veterans who reconnected at US Aggregates after serving together over 30 years ago. 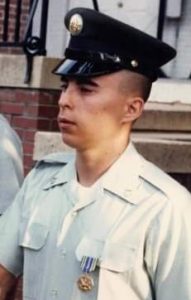 Kris Grandlinard joined the armed forces in 1986, following in the footsteps of World War II veterans in his family. “I felt a duty to honor them and to serve my country,” Kris said. A recruiter’s call for special volunteers set him on a course to Arlington to join a special unit called the 3rd Infantry, also known as the Old Guard. Since 1784, the Old Guard has performed ceremonies and attended to dignitaries and diplomatic events in Washington, DC.

In preparation for joining the Old Guard in Fort Myer, VA, Kris went through more than just basic training. “My company wore period uniforms of the Revolutionary War,” he said, “and we had to polish the buttons ourselves.” The precision and attention to detail instilled in the recruits was essential to their performance not only as soldiers, but as leaders of ceremony. 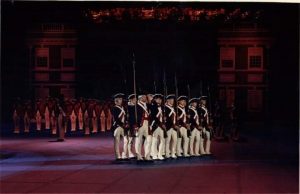 The Old Guard performs in the Spirit of America pageant

While Kris would lead burials at Arlington and escort government officials, his unit also performed in the Spirit of America, the largest military pageant in the US Army. In the pageant, the Old Guard would reenact historic battles in authentic uniforms while carrying and firing real firearms.

“It helped that the lights were only on the floor and you didn’t see the crowd, but you knew they were there,” Kris said. If he could have seen into the sound booth during his first Spirit of America in 1986, he would have noticed Chuck Myers, who would become his coworker decades later. 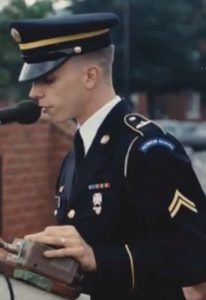 Chuck’s career ambitions in voice work led him to the military. “In high school, I was terrified to speak in front of people, so I had to learn really fast to overcome that,” he said. After earning a degree in broadcasting, he decided to further his education by joining the armed forces. Like Kris, Chuck was recruited to join the Old Guard; after an audition, he got orders to train in preparation for serving at Arlington.

From 1984-86, Chuck worked at Arlington National Cemetery, issuing periodic announcements. His duties also led him to become “the voice of the Old Guard”—the narrator of the Spirit of America pageant.

Chuck’s last Spirit of America performance was in 1986, the same year that Kris began his tenure with the Old Guard. Both men—one on stage and one narrating from the sound booth—would end up in eastern Indiana decades later, both working for US Aggregates. 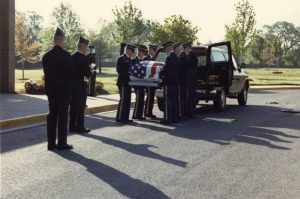 After four years in the army, Kris decided to return to agriculture on his family’s farm. Having grown up across from a stone quarry, he met the owners and mentioned he was looking for a job. In 1990, he started at US Agg’s Linn Grove, Indiana location.

Chuck came back from the military and began working in construction with his brother-in-law. He transitioned to factory work, and then to his current job as a Plant Clerk at US Agg’s Portland, Indiana location. He continues to do radio, voiceover and narration work in his own time.

“I take great pride in being able to serve my people and our country. I just wanted to give back after what this great nation has given me,” Kris said, referring to the gravity of his work in the Old Guard’s Alpha Company and its impact on the families of those he helped lay to rest in Arlington. 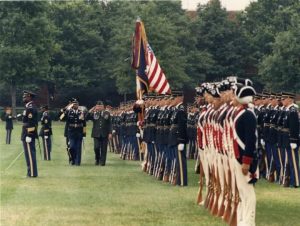 The Old Guard at a Revolutionary War reenactment

Chuck appreciates the understanding of American history he gained as a member of the Old Guard. “It was a privilege to serve my country. I really enjoy living in this country and I understand the way that it was formed,” he said.

Fast forward to 2019. A US Agg newsletter celebrating the company’s veterans detailed both Kris’s and Chuck’s service histories. “I saw it in the BLAST, and the next time I saw Chuck, I asked him about it and we got to talking,” Kris said. “It was kind of neat that we were both there, even though it was a short period of time because Chuck had moved on in ’86 and I was just getting there.”

“What are the odds of that? Such a small area we live in, a rural area, and ending up at the same place,” Chuck added. Out of all the possible placements for a soldier in 1986, both ended up in the same premiere unit, overlapping for a single performance.