As a Director of Operations at Heritage Interactive Services, Shaun Miller oversees business in the US and Canada. When he started out, he had no idea how far a career in sustainability would take him. We sat down with Shaun to talk about the evolution of his career over the last nine years.

Let’s get started with the beginning of your journey. How did you first hear about Heritage?

I went to Indiana State, and when I graduated, I had taken over as general manager of a fine dining restaurant in Terre Haute, Indiana—but I lived on the west side of Indy. That’s a heck of a commute—it’s an hour and a half each way, but 23 years old and GM of a nice restaurant was a great place to start. At the time, my brother-in-law David Cripe worked for Heritage Environmental Services (HES). He said, “I know you’re not sure what you want to do, but if you want to be closer to home, Heritage is always hiring.” I took the chance and started as a temporary employee at HES in fixation (the management and disposal of contaminated waste by immobilizing hazardous contaminants). Fast forward several months later, I became group leader, and I was still trying to figure out where I wanted to be. Every time I had an opportunity to leave this organization, they gave me a reason to stay.

After my promotion to group leader, I helped deploy the HES call center, worked inside sales, and in 2014 I was again at a crossroads. I had gained all this experience, and I wanted a career, so I had to decide, where do I want to go? I interviewed for a program manager position at Heritage Interactive and got the job—and as much as I enjoyed the hazardous waste side, I loved broadening my horizons and being able to move into non-hazardous waste, and trash and recyclables, and byproducts and all kinds of commodities.

Then I went from program manager to senior program manager to operations manager and here I am as a director today. Now, I’m at the forefront of world-class sustainability services for our customers, which is awesome. For instance, we’ve aided companies in diverting their byproduct waste, contributing to zero landfill status—and more recently, we worked with ClimeCo to help March Madness go carbon neutral.

I can’t wait to see where I’ll be three years from now, but it’ll be at Heritage, you know? All these synchronicities brought so much opportunity, and I worked to make the most of it. And I’m happy to be here!

Could you go over a bit about how Heritage has invested in you?

How much time you got? (laughs) I’m a big Peyton Manning fan, and he always talks about not always being the smartest in the room, not always being the toughest in the room, but outworking everybody in the room. And that’s always been my mantra—if I’m dedicated to something, I’m going to find every way I can to add value to the organization. I’ve done that over the years, and this company has been good about recognizing that. Whether that’s about collaboration opportunities, promotions or bonuses, growth as an individual, I could go on and on.

The biggest impact on me was back in 2018, when I was promoted from Operations Manager to Director, it happened to line directly up with the Connect, Collaborate, Innovate (CCI) initiative. It’s a training program where THG invests in the future of potential leaders from across the family of companies. It created relationships and bridges across the organization. You were able to meet people whom you wouldn’t have otherwise known—and I used that network just last week to introduce a colleague to a resource at another Heritage company! I was able to be a bridge for others, which is a great thing, and I know that there are others willing to be a bridge for me as well. 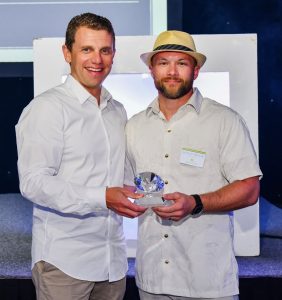 Is there a point that stands out to you when you realized that this was a career as opposed to just a job?

When I moved from HES to HIS, I could see the runway of what we could do, both when I was there initially and what we could grow into. I was able to work as I saw fit and add value to the organization—and the fact that Heritage enables me to work in such a way—it all just kind of clicked. And that’s continued to evolve over time, because the term sustainability evolves every day, and it’s an exciting time to be in this industry. We’re talking about the course of a few years, but I would say sometime around 2015, 2016, I was like “okay—this is where I want to be.”

What does it mean to you to be part of a family business?

A lot of companies will say, “we’re a big family,” but everything I’ve seen here proves that leadership truly lives out that mantra. I met my boss now, Peter Lux, when I was going through CCI and getting exposed to THG; again, this company provided me that just because I worked for it and was vocal about where I wanted to go within The Heritage Group. Getting to know Peter and work with him, and now directly working for him, it was the same mentality. Whether I’m sitting in my office, with our team, or I’m having that exposure to a higher level, the feeling is always the same.

We’re given access to capital and resources and things that a very large organization typically has access to, but there’s always that personal feel to the interactions with our leadership—in how they empower us to manage and to make our own decisions. Not all companies will afford you that autonomy, and I think that has a lot to do with this organization having that family ownership and mentality. 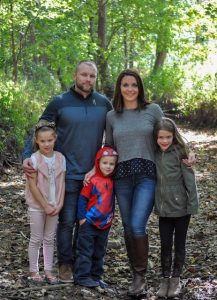 Shaun with his family

Do you feel like that also affects the way you interact with customers or clients?

I think so. I think this is an empathy-minded organization, and I try to lead with that. When you have that servant leadership attitude, doors open, it shows your customers that you care, it affords you business retention and trust. The culture here definitely affects how I do business. Not only that, but this company gives me the opportunity to investigate new things.

My work style over time is taking every opportunity I see to invest in others. That’s been engrained in me in large part due to this organization and the way they’ve treated me. I try to pay that forward to my employees, my colleagues, my leadership, my customers, my suppliers, and it bleeds over into your personal life, too. When you see that, and you see the benefit of it, you lead with that. It’s about touching as many lives as possible and impacting others in a positive way. There’s always the chance that it could come back around—you never know. It builds relationships and trust, and it’s good business, too.

Where does your passion for sustainability come from?

I fell into sustainability. It just kind of happened, and before I knew it, I was in deep. I realized how much I liked it, and it’s such a broad term today. But to me, sustainability is not just about waste. It’s about time, equipment, people and labor. It’s about opportunity and attitude. Sustainability, to me, is so much of elongating the things in life that we will inevitably need indefinitely in so many different ways. That’s why I like where we’re at now. A couple years ago, it was all about supporting zero waste to landfill, and then simply zero waste—now it’s bringing in carbon neutrality. I have a call coming up with one of our customers to support zero water discharge, and my colleague is working on industrial hygiene for other customers and compressed air efficiencies and water balancing for another. It’s such a spiral of potential in the term sustainability. And it’s not all about hugging trees—it goes so much more beyond that. It’s a discipline. 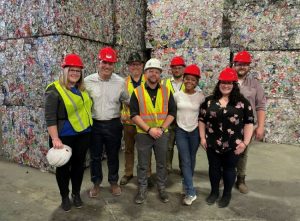 Shaun with his team

What’s your advice to someone who is at the same place that you were when you graduated college, looking for an opportunity?

One of the scariest things in the world is to be vulnerable, but my best advice to my younger self and to anyone in that position is to stay humble and vulnerable. It’s a nice way of saying, “ask stupid questions.” And there aren’t really any out there, which I know is a cliché, but you can’t shrink into yourself. You have to find ways to get out of your comfort zone. I’m not a great public speaker—I mean I can speak to my customers, to my team, but even in a Teams call, if there’s 80 people, or in a huge venue, I get a little squirrely. So what I’ve done is found situations to intentionally put myself out there, and know that I was going to look silly, but convincing yourself that it’s okay, is probably the hardest part. If you don’t ask, you’ll never know it, and at some point, you won’t be as good at your job for not knowing. Read, research, learn. I hope that when I’m at retirement age, I’m still looking for ways to learn, and it’s only going to benefit you. It’s never a waste of time.

Right now, what is exciting to you in this moment of your career?

Over the last five years, we doubled in size. We invested heavily in people, and in training—KPIs, too. Another interesting aspect between the public and private sector is that we have the ability to integrate, measure, grade and improve, so we focused on our metrics so that we could maintain scalable, rapid growth. We also invested in our people so that we have the right folks in the right positions, and it set us up for where we are today. Our fiscal year just ended—another record year, and our growth rate is ridiculous, and we’re prepared for it now.

We’ve been working within sustainability since 2000, and the evolution of sustainability over the last 20+ years has been phenomenal, and volatile in another way, and opportunistic. Now we’re here, and I’m watching The Heritage Group through Techstars, Heritage Sustainability Investments, all these different elements and the ability to access all those resources— it’s all growing. It’s an exciting time to be here because I’m not exactly sure where we’re going to go, but I know it’s going to be great.

HG Ventures Invests in and Partners with American Rare Earth To Expand Battery Recycling and Metals Supply for U.S. Manufacturing

HG Ventures, a venture capital investment firm and division of The Heritage Group that supports a sustainable future in materials, infrastructure, environmental solutions and industrial systems, announced today that it has invested in and formed a strategic partnership with American Rare Earth LLC, a subsidiary of the American Resources Corporation (NASDAQ:AREC) to scale up recycling of batteries, magnets and e-waste to recover and supply critical and rare earth metals to U.S. and global markets and contribute to the circular economy. Through its investment, HG Ventures has an ownership stake in American Rare Earth, as well as rights and warrants for subsequent investment.

With American Rare Earths’ first purification facility expected to be operational in the first half of 2022, this partnership further strengthens American Rare Earth’s foothold into various feedstock relationships for battery and magnet material including from spent electric vehicle and windmill motors and e-waste for which there is currently no comprehensive, sustainable, end-of-life solution. Additionally, the partnership opens up relationships with public and private customers demanding these purified metals to drive the growth and success of the electrification and clean tech markets while advancing national security interests.

American Rare Earth and Heritage are expediting the path to being the United States’ first and lowest cost producer of domestically-sourced, purified and sustainable battery and magnet metals.