The Heritage Family Represents at World of Asphalt and AGG1

Boasting 400 exhibitors and 120 educational sessions for team development, World of Asphalt and AGG1 brought members of the Heritage family together in Nashville, Tennessee, in late March. Part trade show, part industry conference, the events’ 20th anniversary broke records with more than 11,400 asphalt paving and aggregates professionals in attendance. Representatives from across the Heritage family of companies showed up both to learn and to lead. 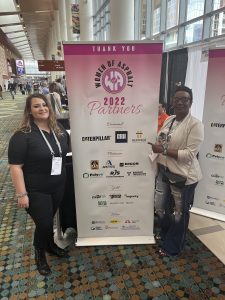 One of the 100+ professional development sessions was a roundtable on Increasing Diversity hosted by Women of Asphalt and featuring Marquisha Williams, safety representative at Milestone Contractors. Marquisha, who is also on the board of Women of Asphalt, participated in the roundtable discussion focusing on diversity and inclusion among workforces in the asphalt industry. “Speaking on the panel was an amazing experience. It’s something I’ll look back on for years to come,” Marquisha said. “Being able to see yourself represented is important in this industry. Companies have to be intentional when hiring to become more diverse and inclusive organizations.”

Heritage Construction + Materials (HC+M) has deep ties to Women of Asphalt. In 2021, The Heritage Group contributed eight of the 84 total participants in Women of Asphalt’s inaugural Mentorship Program. This year, 16 of the 118 Mentorship Program participants – both mentors and mentees – are members of the Heritage family. “I’m sure I can speak for most of The Heritage Group ladies when I say that THG’s participation reassures us that we belong, and that this company is always striving to keep a culture that fosters diversity on many different levels,” Marquisha commented.

Among the attendees was Patti Gault, strategic communications director for HC+M. “Marquisha really made me proud in the Women of Asphalt roundtable. She had great insight and there was a good group of us cheering her on,” Patti said.

This year, HC+M was one of the organization’s diamond sponsors. Heritage attendees of Women in Asphalt programming, including Marquisha, recognized the impact of the organization in their industries: “It is amazing that The Heritage Group has seen the need to support women, but to see that we are going all in and becoming Diamond partners with Women of Asphalt makes me speechless.” 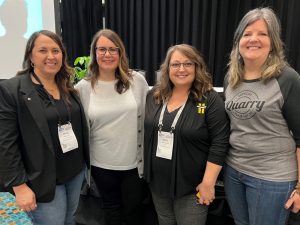 Across the street at AGG1, HC+M’s Strategic Communications Director Patti Gault spoke on a panel of aggregates industry professionals called Growing a Great Workforce Culture. In front of a standing room-only crowd, Patti presented on THG’s culture, “which paved the way for me to talk about some of the special employee and community initiatives at the Heritage Group,” she described.

Among these initiatives were Lean Six Sigma training, Kids Science Camp, the ONE Heritage Fund and THG’s internship program. “Also, starting up the Social Impact Task Force garnered a lot of interest, and I was grateful to be able to share some of the terrific work we are doing to support our local communities,” Patti added.

“It was wonderful to spend time with my Heritage family away from our normal daily work in a great city. I was impressed to see the level of representation from across Heritage at the workshops.” — Patti Gault

The impact of AGG1 didn’t stop in Nashville; Patti returned to Indianapolis ready to share what she learned with her HC+M team. One major takeaway was the opportunity for community contribution that exists in the construction industry. “Building the roads that connect society makes construction workers a part of something bigger,” Patti noted. “They help families get to work and school — and ultimately makes their community a better place to live.”

An Accelerator Alumnus at World of Asphalt 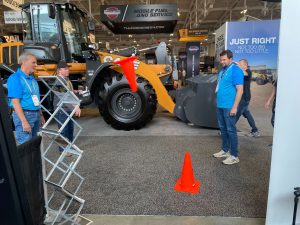 Last year, BroadLoop Founder and CEO Nick McRae spent his fall at The Center as part of The Heritage Group Accelerator powered by Techstars. BroadLoop, a software platform that streamlines construction fleet management, has carried on the energy and attitude of creativity from their time in the Accelerator. BroadLoop’s booth featured cone flipping, a game typically played during downtime with construction cones, for visitors: “contractors don’t have time to flip cones while waiting on trucks any longer,” Nick said, “because BroadLoop gives them control over their virtual fleet.”

World of Asphalt was BroadLoop’s first trade show, “so we learned a lot,” Nick said. “We were actually placed on a waitlist when we initially applied last year, but a THG connection from the Accelerator was able to send an email on our behalf and we were assigned a booth very quickly.”

Much like the Accelerator, the trade show floor offers a chance for innovators in related industries to connect. Along with new interest in their product, the BroadLoop team reconnected with acquaintances from THG. “We had met a few of the AMI and J-Band team already as part of the programming run by HG Ventures,” Nick commented. “It was very exciting to see the effectiveness of that program continuing long after it had formally concluded.”

World of Asphalt and AGG1 will return to Music City in 2024 for another gathering of industry professionals. Whatever the industry – and the world – have in store, the Heritage family will be there to take part.

Giving Back with Give Bags: Diaper Banks
Supporting Foster Families